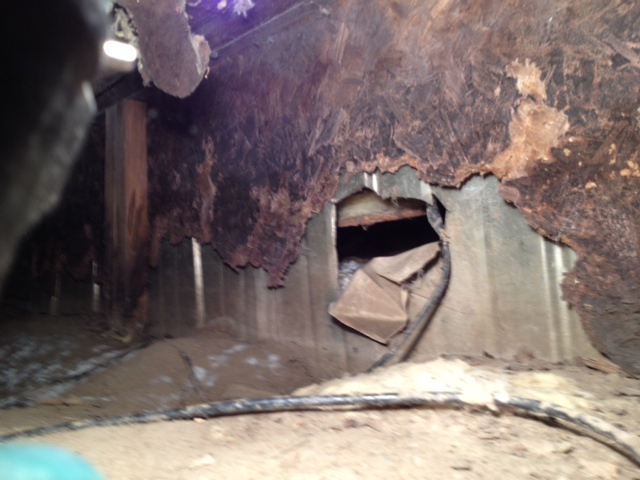 From time to time in our travels we encounter the Do-It-Yourself Wildlife projects that are either successful or not. It is hard to blame anyone for attempting the self-remedy to a Squirrel, Raccoon, or other wildlife problem given the misconception of simple fixes to those problems. We are always impressed with the research and thought that goes into DIY Wildlife removal projects and in most cases the effort is not wasted. The facts are that Wildlife including Raccoons, Squirrels, Skunks, Groundhogs, and Chipmunks are intelligent animals and have adapted over time to urban sprawl and the ability to find food and shelter in many environments. Occasionally we see the DIY Wildlife that leads to further damage, costs, and overall discomfort.

Brockville, Ontario 11:30pm April 26, 2013 – call comes into Emergency line. Raccoons (plural) are in a client’s attic. The client through our 24/7 Emergency Line, reaches one of our professionally trained Wildlife Technicians Wild J. The client had been hearing noises in their attic through the night for a few weeks on and off. They had also noted similar noises in late March. The client had contracted a roofer to inspect the noises and replace a large portion of shingles on their roof between April 23-25 and had asked them if they had noticed anything given the noises they had heard. The Roofers did not notice anything at that time. The homeowner had also installed Rodenticide prior to this for what they thought might have been mice.

At 12:45am our Wildlife Technician arrived at the client’s home, although it was dark outside, our Tech was able to enter the attic space to assess the sounds. Our Tech found a family of 5 Raccoons – two adults and three juveniles active in the insulation. Our Tech also noticed a hole that was created in the new portion of the roof. He has suspected the Raccoons were in the attic prior to the roof repair then had been trapped following the repairs. While the Raccoons had created an escape they had also created a hole at the very peak that was exposed to the elements. In the end, our Wildlife Technician safely removed all of the Raccoons and temporarily sealed the hole. The next day we provided permanent proofing, attic restoration following the feces and water damage from the exposed hole and a full warranty.